Human Pup Play is a role playing game in which a person plays the role of a pup or a dog. You can play it alone, along with other pups/dogs, with a handler trainer master , or one of many other possible roles.

It does not necessarily have a sexual background. For many (but not all) players it is just a pleasant and relaxed way to leave everyday life behind and play with others freely.

You can also find more information in our flyer.


No, real animals are not involved - you just go into the role of an animal.


Human Pup Play is independent of gender, age, and sexual orientation. Anyone can be pup or dog, no matter what size or weight or if you are lesbian, gay, bi, trans*, inter, queer or hetero. The only thing that matters is having fun with the game.


That is very diverse. Some choose the name themselves, while others get it from the handler, owner, or other friendly pups/dogs. A pup baptism or a fixed ritual isn't always carried out and there is no rule how the name has to be created. If you need inspiration, you can search for a name whose first letter matches with the one of your first name. You can also orientate on a variety of things that make you stand out or that you like. It is important that you like the name and that it suits you. Because, as in real life, a dog doesn't usually change its name.


Pup players can play the role of a pup or a dog , but they can also be handler, trainer, or owner. Pups and dogs take the role of the dog while handlers, trainers, and owners as bipeds are the supervisors for the dogs and play with them, train, and educate them. The dogs can also join together to form a pack – comparable to a circle of friends.


Not every dog is frisky in its behavior, playful, or maybe clumsy. In order to be able to describe the differences in the behavior of a dog easier, you can roughly divide them into pups (whelps) and dogs (adults). This makes it easier for a trainer to evaluate what the dog is already capable of and what he or she has to keep an eye on in education.

In addition, there are other differentiations, such as young and old dogs, which respond more to individual characteristics of the dog.


Several dogs can form a pack. This can only refer to the current game or persist permanently, comparable to a circle of friends.

As in a real pack, there usually exists a strong ranking. Leader of the pack is the Alpha. Beta for the number two in the pack and Omega for the last one are additional popular terms, which can be further divided.

The arrangements inside the pack and the rules that apply are set within the pack or given by the alpha.


The headspace is the mental state of a pup/ dog while playing. Dogs live the moment. They do not think about the future or the past, but act according to their instincts. To enter the headspace means to put aside human thoughts and worries and live the inner dog.

A handler , trainer, or equipment (gear) can help guiding someone into the headspace and explore the dog's nature, but it's not mandatory.


There is not exactly one game with the one ideal pup or dog. For some players it's all about social behavior, while for others the sexual aspect is significant. For everyone Pup Play is different and can be combined with diverse (sexual) varieties.

There are no valid rules on how a dog has to behave. Each dog is as individual in character, behavior, and desires as human. The character during the game can also be fundamentally different from the one of the human behind. To explore this character is a very exciting part of the game.


Go down to all fours and start to bark!

In the beginning, it may not be easy to get yourself into the role. No matter with or without equipment: What works for one does not have to apply to the other. There is also not the one kind of Pup Play that you have to follow. For the first step, it is certainly best to just try it.

Try to think like a dog. If you see a ball, you want to catch it. If someone gives you a reward, you start wagging (even if you do not have a tail it's not less sweet). Human language does not matter much to you - unless you are commended!

There is not much for you to worry about. It's all about a carefree and playful attitude and sometimes just growling at the next-best squirrel.


At the beginning many people do not know what to do with a pup or a dog. This is not so complicated: Pet it, play with it, and commend it when it behaves well. Caring is an important part of your relationship. There is nothing better than to experience the affection and joy that a pup brings to you when it wags happily.

If you train your pup, you can use regular training books for dogs from the pet shop. Keep in mind that your pup can't immediately do everything like a real dog, and make sure it stays in the role (humans learn tricks and stunts faster).


Real dogs can't talk, this should be considered in the game. But there are other ways to communicate with each other: In addition to sounds such as barking, growling and whimpering, body language plays an important role. This graphic gives some inspiration how that might look like: 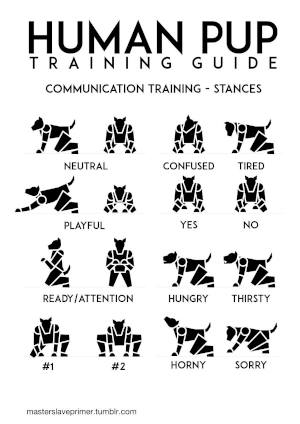 
Absolutely no way! Unless the dog signals this or it is necessary by other reasons, the hood must not be removed. Not even if you only want to see how the human underneath looks like. This interrupts the game and may tear the person out of the role.


The most important thing for Pup Play is the headspace. It's about immersing yourself in a dog's life and leaving behind everything human. In general, for this no equipment is needed, but it can help to make it easier to reach this condition.

The most important equipment are a mask and a collar. A tail contributes to the good looks of the dog. Paws and knee pads are helpful in playing as they protect against injury. The perfect game is completed by nice toys and a bowl for drinking. And then of course, the treats must not be missed to reward the dog!


The equipment (gear) can be obtained from different sources. In addition to relevant shops you can get it from regular animal and sporting goods stores.

For online shops outside the EU, it has to be considered that the parcels may need to be picked up from customs. Not only this entails extra delays and costs, it can also mean that the package must be opened and viewed together with a customs officer.

The following list contains the most common shops that you can use to purchase equipment from: